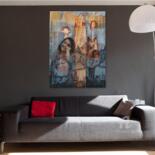 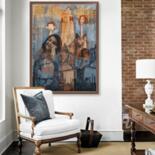 This painting is about a tale:
"No one lived on the top of the mountain any longer.
Houses had been eaten by the hunger that time has and the belfry of the church fell asleep on the rock sound of the last Ding-Dong that the bell rang. But for Rosana and Alexandra was the time to adventures and discoveries. The September before school was spent in the village, and the last summer days had the flavour of Strawberry and plum jam that they kept all year round.
They went out searching for the falling apart houses' secrets and seeking the memories, remembrances and the stories of the people who already lived there. Once again, early in the morning they took breakfast and left under Grandma's warnings not to do anything dangerous and risky.
While they were peeking at the belfry, they heard a distant, lonely and sad meow. They called him back and Napoleon the cat of all battles, appeared, soft and gray, gentle and curious.
Who had forgotten Napoleon they didn't know or how he had appeared in the village.
There were old telephone book pages pasted on the belfry walls and on them a drawing of a House, a boy and a girl, maybe the owners of Napoleon who had to leave him behind in a hasty moving or in a touching leaving. The girls didn't even hesitate.
The cat was found, so they took him to Grandma's House. But it was the cat that hesitated between the comfort of parties and pampering grandmother and the hunting of unaware little field mice, in the ruined village.
He chose the village where there was more fun and freedom and, from year to year, in September, the girls would come back and he would have the company of his occasional owners, for adventures and discoveries. The rest of the time, he took care of abandoned houses and their owners drawn on the walls in ancient phone lists that they had left behind. Maybe they will return in any end-of-summer."

Done on gallery wrapped canvas, with no need for framing, as the edges are painted, ready to hang.

I sign my paintings on the back, but I can sign them also on the front, at request. This painting includes a Certificate of Authenticity.

NOTE: The images in context are not to scale and are for display purposes only.

Available as prints from €46

Available as digital files from €30